I really wanted to get something pretty, like the metal jewelled style ones, to suprise OH and leave in whilst he takes me from behind. But i keep seeing horror stories about them getting lost inside people! If i ended up in hospital, and i didn’t die of a perforated bowel, i think the embarrassment would probably kill me!

Does anyone have any tips or recommendations?

Get a jewelled one and try it we are all different but somehow the same.

Something with a flared base will stop the disappearing as long as you are somewhat sensible too with sizing.
Also remember that area was designed to naturally expel whatever is there so keep relaxed and enjoy yourself

Any with a flared or t-bar base should be fine

It was just that even on some of the lovehoney reviews of the metal jewelled ones a couple of people said they had it got it lost inside. Maybe thats just super unlucky and rare…

I’ll try and find something with as much of a flared base as possible.

I wore a fairly large glass plug with a well flared base for a whole day. This involved removing it a couple of times for cleaning and re-lubing. I was very surprised to find that later in the day the whole thing had gone in, base and all. Fortunately it was easy enough to expell again.

The base of a butt plug needs to be larger than the widest point of the insertable part. Ideally you are looking for 1.5/2 times larger but it’s not easy to find this on round based toys. T-bar based plugs are generally better but they can get in the way of vaginal play if they are too long.

Generally though, the easier you can insert the butt plug the wider in comparison to the toy the base needs to be.

Get used to the plug by yourself before using it with your partner so you can get to know what is a normal sensation and what isn’t. When you do have sex with your partner, make sure they aren’t putting pressure on the base of the plug (look don’t touch).

I’ve got the small and the large jewelled plugs and never had a problem with them. I do generally buy ones with a t-bar base now because they feel more secure to me. I would be wary of large toys that don’t have a particularly large base compared to the thickness of the neck. If the neck of the toy is thin and the base wide then it is very unlikely to get lost, a toy with a wider neck but a base that isn’t much bigger would worry me. Basically, @Calie has covered everything - great advice as always!

I had a horrible experience with a love honey jewelled butt plug and it had the flaired base. But when u looked at it the base was no wider than the widest point of the plug.

I always used it and never had a problem until. 1 day I had it in and then my partner went to take a peek and said had I taken it out!

The horror on my face! It had not ventured too far, but I could not reach it at all. Thankfully, after squatting and him going im so to speak and me pushing down he managed to hook it and pull it out.

Since then I have avoided them like the plague and I would be VERY cautious about using them. I did bring this to love honeys attention.

I know someone who works in A&E . They said they have had people come in with all sorts lost in there. Batteries, rings !! Light bulbs !!! The list goes on. 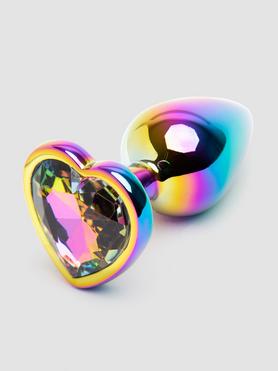 This one is quite good for beginners and it’s beautiful. It is metal so it won’t smell as bad as silicone ones. My Lovehoney classic medium butt plug is my favourite right now and I love it but dang no matter how good I clean it, it still has a smell. I kind of wish Lovehoney would make a metal plug the same size as the classic medium as it’s the perfect size for me. Anyway, I don’t really use it anymore as it’s too small for me and my cheeks completely cover the jewel because my booty cheeks are too fat haha. If you are looking for one though, the one I linked is really pretty. It’s out of stock at the moment though but I’d say snag it up when it comes back into stock if you want to.

Really think it depends on how active you plan to be while it is inserted (and I don’t mean sexually).

I have had a T based plug (bought on LH) disappear inside while exercising so had to go ‘fishing’ with fingers later. Remember that part of the body is designed to eject material so as long as the toy is smooth …

What I would say with the jewelled metal plugs is (even with a long neck) they can start to get sucked in if you exercise but you can feel the rim starting to get sucked in so you can stop and go somewhere to sort it out.

As said by others, the horror stories seem to generally be around people shoving things in there that were not meant to go there (you can find X-rays online of Barbie dolls stuck as well as light bulbs).

The other side, if you are planning to wear one while out with your partner it might slip out unexpectedly which could cause embarrassment depending on where you are and what you are wearing.

I had an issue with the jewelled butt plug too, the medium one.

I’d only had it in maybe 20 mins, I went to lead my partners hand down there and it had gone

Yes thats exactly the kind of scary situation I’ve read of before - and it seems suprisingly frequent!

And @Newton27 - I haven’t bought one of those jewelled metal plugs for that very reason! Glad I didn’t seeing your reports!

It was the heart based one and now I’ve looked at it properly the base is really small.

so I doubt I’ll use it again now